In all of James Michener’s great works, but especially in Hawaii and Poland, he totally immersed himself in the history of his subject before he began writing about it. He then inserted fictional characters whose lives were influenced by major events and real characters of the period. The result was always a warm and discerning account of what life would have been like for “ordinary people” caught in the crossfire of dramatic historical circumstances.

In his stories of 20th century Michigan, Joseph Pluta is a modern day Michener. 21 Yesterdays is the 4th of his classic works of historical fiction set in Michigan and his 3rd medley of short stories. This collection is by far his best to date. His characters are powerful, his accounts are touching, his wit is sharp, his sense of humor is always evident, and his handicraft is historically accurate.

Pluta is equally comfortable writing about small town Three Oaks in 1903, upper peninsula culture in the late 1950s, and southern Michigan differences of political opinion at the close of the ’90s. His professional training as an economic historian and his literary talents have enabled him to mix fact and fiction while being keenly aware of the important dividing line between the two. Here is a writer who has lived in Michigan during his formative twenty years, spent time in all of the communities he incorporates into his writing, and knows the intricacies of what it means to be a Michigander.

The range of topics covered in 21 Yesterdays is considerable. Pluta’s description of each is thorough. There is youthful indiscretion, family warmth, impropriety among religious clergy, dishonesty in the conduct of universities, corporate corruption, romance, and psychological trauma. All tales contained within this group of short stories have individual merit. In the eyes of this reviewer, four stand out.

“His Name Was Dad” is a poignant tribute to a (his?) father who lived his own troubled life in hopes that his son could avoid similar hardships. The story is unusual yet realistic, timely yet timeless, distressful yet optimistic. Equally insightful is “Jeri Christopher”, an account of a woman who has raised her now teenage son on a limited income while the young man’s economically successful father is unaware that he exists. When the parents eventually reconnect, the outcome is both surprising and educational.

“’03 Three Oaks”, set at the beginning of the 20th century, documents the success of a flying machine in Michigan before the 1903 achievement of the Wright Brothers. The story is based on historical fact, the visit to this small town of a U. S. president is well known, and the lives of two brilliant women in this setting are both perceptive and believable.

By far, the best story is “The Iowa Trip”, where three young men happen upon Buddy Holly, Ritchie Valens, and J. P. Richardson just prior to their tragic deaths in a 1959 plane crash. In this account, the author is fully aware of all events leading up to that last concert even though the existing literature has often contained contradictions and inaccurate information. Read this story and you will feel that you were at the Surf Ballroom in Clear Lake that frigid February night.

Joseph Pluta is arguably the best writer of historical fiction based on the Michigan experience. His prose flows beautifully, his descriptions entertain, his plots grab the reader’s attention, and the lessons he offers are worthwhile. To date, this book is his ultimate achievement. His earlier work on Michigan is also worth reading. His future fiction is the subject of much anticipation among his many satisfied readers. 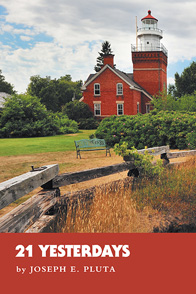